The family farmed in Brownsburg, Hendricks County, Indiana, until 1907, when they moved to Crawfordsville, Montgomery County, Indiana, to work in the factories. In 1917, Cora’s husband died when he was cutting trees and fell to the sidewalk, hitting his head. Shortly after that, she and her four surviving children moved to Columbus, Franklin County, Ohio.

John and Melissa also had twin girls who died at birth about 1860.

John served in the Home Guards in Harrison County, Indiana, who took part in the Battle of Corydon during the Civil War. In 1868, he migrated to Washington County, Iowa.

Robert’s parents came to Indiana from Butler, Pennsylvania. Robert quit school after the fourth grade. He also lost an eye while chopping wood, but after marrying and having a family, he earned a degree in Civil Engineering.

Local citizens razzed him about leaving home at age 62 to build houses in Barrington, Illinois. He not only won contracts to build them, but his houses were featured in the Roto Gravure section of the Chicago Tribune.

After the banks failed in 1933, he made his home in Cincinnati, Ohio, with his daughter Margaret. 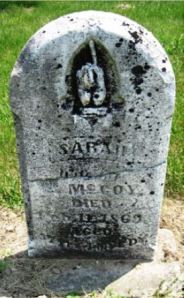 The family lived in Greensburg, Decatur County, Indiana, before emigrating after 1864