George and Anna lived in Hammond, Indiana from 1893 to 1926 with a few years in between in Hartford, Van Buren County, Michigan.

George Robbins was appointed in 1894 Captain in the Fire Department. He was also in the courtroom when the Tin Man came in and started shooting and he was shot in the arm.

The family left Ripley County, Indiana, about 1876 for Buffalo, Wilson County, Kansas. John Stark was a soldier in the Spanish American War and served in Cuba. He lived a number of years in the Soldier’s Home in Leavenworth, Kansas.

Dan’s father, Lot Wright, who was born somewhere in Pennsylvania about 1811, moved to Hancock County, Indiana, around 1832. He left for “the West” when he was about 23 and eventually arrived in Utah where he met and married Emily. He was primarily employed as a blacksmith, but also did some farming. In his midfifties he apparently suffered a stroke and was partially paralyzed and confined to a wheelchair.

James immigrated to Indiana in 1814, probably from Jefferson County, Tennessee. He left in 1846 for Ft. Madison, Iowa.

Charles left Indiana in 1936 and moved to a chicken ranch in Petaluma, Sonoma County, California. He served in both World War I and II. 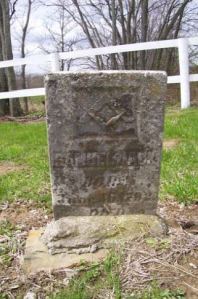 Children with Bertha May Lackey:

Nathan’s family originally came to Indiana in 1836 from Jessamine County, Kentucky. He was born in Haddon Township of Sullivan County, Indiana, and worked on a farm until he was 18 and joined the Army. While on furlough in 1937, he met his future wife at the Great Lakes Exposition in Cleveland, Ohio. They married on 1 June 1938, and he was honorably discharged a little over a year later at Fort Benjamin Harrison, Indiana.

He and Bertha May settled in Cleveland where they raised their family. She was born Bertha May Green, but after her mother divorced Elba Green in 1924 and married James Joseph Lackey, Bertha was adopted by Lackey and changed her name to Lackey.

In March of 1944, Nathan was drafted and served with Company D, 18th Infantry, 1st Infantry Division. He was severely wounded in action outside of Aachen, Germany and was hospitalized in England before being transported to a hospital in Pennsylvania. He was again honorably discharged on August 3, 1945.

Nathan was a machinist and worked at the Cleveland Pneumatic Tool Company, Cleveland Rock Drill Division of Leroy Company, and was Forman at the Elwell Parker Electric Company,
making electric customized truck lifts. He retired from Elwell Parker in 1978 and later moved to Greensboro, North Carolina, to live with his daughter, Carol Ann, due to ill health.

Annette was descended from a long line of Indiana pioneers. Her first direct relative to arrive in the Old Northwest Territory was Jesse Vawter who brought a flatboat across the Ohio River from Kentucky to what is now Madison, Indiana, in 1806. He was followed by other direct ancestors: Thomas Endicott who moved to Posey County in 1817, Owen Todd and Maria Jane Paxton who arrived in Jefferson County in 1817, and two different Butler lines – John Hopkins Butler (Jefferson County, 1819) and Chauncey Butler (Jefferson and Jennings counties, 1815). Direct descendants of these and other family lines moved throughout southeastern and central Indiana, finally settling in Richmond, Wayne County.

Annette, her second husband, James Cheeseman, and their children left Richmond in 1946 and moved to Sarasota, Florida. The family then moved to Columbia, South Carolina, shortly thereafter relocating to Burlington and then Lexington, North Carolina. They moved once again, ending up in the greater Los Angeles, California area in 1951.

Annette was gifted in the fine arts; particularly as an author of short stories and poetry and as an amateur artist, painting both in watercolors and oils. She was active as a Girl Scout leader and in PTA. During World War II, she made piston rings at the Perfect Circle plant in Richmond. Following the war, she worked at various secretarial jobs. Her second husband, James Cheeseman, enlisted in the Army during WWII and worked closely with the French Resistance until D-Day. He was awarded the Bronze Star with two clusters, a Presidential Citation, the Croix de Guerre (French Cross) and five bronze service stars. He was also named an honorary field director for the American Red Cross.

Both Annette and her second husband are buried in the Butler plot in Earlham Cemetery, Richmond, Indiana.

Huldah came to Indiana from Campbell County, Virginia, a couple of years after the birth of her daughter Mary. She lived in the Cincinnati District of Union and Fayette counties in Indiana. When she moved to Warren County, Ohio, where she died, is not known.