James William Beckley was a United Methodist Chaplain in the Air Force. He was my father and I am grateful for him and my mother who brought me into this world in Angola, Indiana. I am Once a Hoosier and Always a Hoosier as well. I will probably leave this world in Texas, but I am grateful for Indiana. My son is moving to INDIANA with is wife in April for a new job in Indianapolis. Isn’t it interesting that everything for my son is coming back to Indiana? :-)

Harry was born in Indiana and lived in Ohio. He returned to Indiana before his marriage. He worked as a carriage body finisher, a shoe dealer, and was a master mechanic for the Chicago, Indiana & Eastern railroad, which ran a short route in Indiana. Later, he was an auto painter. He could draw, play piano, and tell stories.

The family moved to San Antonio in 1911. 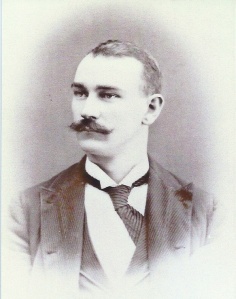 Olive lived in Jay and Randolph counties while she was in Indiana. She was moved to California by her son Frank and daughter Pauline when her health began to decline in 1966. When she died there in 1973, her ashes were flown back to Indiana to be buried beside her first husband, the father of all her children, in Fountain Park Cemetery in Winchester, Randolph County, Indiana.

Edith was a registered nurse and worked at the Irene Byrum Sanitarium in Fort Wayne, Indiana, until after her marriage. By 1947 she was living in St. Louis, but moved to Winchester where she lived for many years before making her final move to Santa Ana, Orange County, California.

Frank’s ancestors came to Indiana from Ohio sometime between the 1870 and 1880 censuses. The family lived in Wabash and Jackson townships of Jay County for many years, but by the time Frank was born, his father had located on a farm outside of Winchester in Randolph County, Indiana. Frank was living in St. Louis by 1947 but returned to Winchester for many years before moving to Santa Ana, California, where he lived out his life. He was a laboratory technician and worked long hours in the late 1940’s during a polo epidemic that caused many deaths in Winchester, Indiana.

The family left Indiana in 1907 or 1908. Benton Steele was noted in A Round Indiana: Round Barns in the Hoosier State by John T. Hanou.

Isaac, Sarah, their six children, and three young grandchildren left Indiana in the early 1880’s in a covered wagon for Howard Lane, Minnesota.

The family left from Kentland, Newton County, Indiana, after James was born in May 1876. Newton was born in Iroquois County, Illinois. They arrived in Florence, Kansas, in 1884. John was in Company A of the 128th Regiment of Indiana Volunteers, serving from November 1863 to January 1866. He was with Sherman on the march to the sea and also fought at Gettysburg.

Thomas came to Wayne County, Indiana, about 1814- 1815. They resided in Chester, Wayne County; Mississinewa Township; Delaware County; Pleasant Township; and Grant, Elkhart, and Randolph counties. He left the state in 1853 from Grant or Howard County. Thomas and Mahala were among the founding families of the Quaker settlement at Baraboo, Wisconsin. He was a minister.