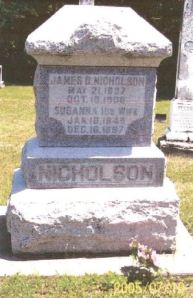 Children with Edwin I. Dunham:

Edwin I. Dunham, a mechanic, was the first in his city to succumb to “La Grippe,” which developed into pneumonia. Dying at 37 years old, he left his wife with five young children, the oldest of whom was nine years old.

Caleb moved to Jasper County, Iowa, between 1860 and 1870. As early as 1875 the family emigrated from Iowa to Mitchell County, Kansas, along with Caleb Wesley’s uncle, Leander Smith.

Walter William Wiggins was adopted by Caleb and Mary Jane.