Worked as a miner, an oil driller, constable, farmer, and raised cattle.

Other Information: Aaron and Mahala were members of the Society of Friends (Quakers). Aaron was a farmer, and owned much land in Spiceland.

Mathew came to Indiana from Mason County, Kentucky, in 1832 and lived in Troy Township, Fountain County, until emigrating to Iowa in 1852.

Oscar started west in the spring of 1850. He started from Bloomington, Monroe County, Indiana, overland to Columbus, then by railroad to Madison, by steamboat to Louisville, Kentucky, and another steamboat to St. Louis, Missouri, then by another boat to Kansas City, Missouri, where his parents and family met him. It then took them nine months to cross the plains.

He had a gold stake for a while. Then he became a printer for several publications. He was the Deputy Collector of Customs at San Pedro and a member of the Los Angeles City Council. Macy Street in Los Angeles is named for this family, since the only house on the street for many years was the Macy’s house.

The family crossed the plains in 1850, arriving at San Gabriel Mission on 1 January 1851. They camped two months at San Gabriel, and then moved to El Monte. In 1852, the family moved to Los Angeles, where Dr. Macy bought the Bella Union Hotel. They lived on the northwest corner of Los Angeles and Commercial Streets. Dr. Macy then procured a site on the Zanja Madre at what is now the corner of North Main and Macy Streets, where he built a low spreading building. 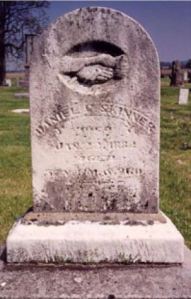 According to Thomas B. Helm’s History of Cass County, Indiana, Thomas and Permelia were among the founding members of the Twelve Mile Christian Church and donated land for the first church building.

Skinner’s obituary in the Logansport Weekly Journal (10 April 1880) states that he moved as a youth with his parents to Ohio, then in 1836 with his family to Adams Township, Cass Co., Indiana. His funeral was one of the largest in the township. Thomas B. Helm’s History of Cass County, Indiana, states that Thomas and his wife were among the founding members of the Twelve Mile Christian Church and donated land for the first church building.

Jennie’s father, William Cyrus Comer, was also born in Indiana. Her mother, Sarah Jane “Jennie” Gleason was born in Michigan, but lived in Indiana as a young woman.

Jennie’s mother died following childbirth, and Jennie was sent to her maternal grandparents in Ottawa County, Michigan, to be raised there. She returned to Rensselaer, Jasper County, Indiana, at age nine in 1900 to live with her aunts, Mary and Lizzie Comer, at their boarding house on South Cullen Street. She stayed there until adulthood.

Jennie left Indiana in 1912 to attend nursing school in Chicago but returned again to Rensselaer to work as a registered nurse at Jasper County Hospital following her graduation. There she became re-acquainted with her husband-to-be and former classmate, Orval Hamilton Crisler. They married in 1920 and quickly were parent of five children.

In 1927, the family moved to Waukegan, Illinois. Later they moved to Chicago, then to Glen Ellyn, Illinois. Following her husband’s retirement, they moved to Dunedin, Florida. At her death at age 94, Jennie’s body was returned to Rensselaer, and she is buried there next to her husband of 65 years in Weston Cemetery.

The Crisler family, headed by Orval’s grandfather, Hamilton Crisler, came to Indiana in 1846 and settled in the Haw Creek Township of Bartholomew County. They moved to Newton County, Indiana in 1861 when Hamilton purchased 240 acres of land in Jackson Township near the later town of Mount Ayr.

Orval moved with his parents to a farm northeast of the town of Rensselaer, Jasper County, Indiana, in 1910. Following his marriage in 1920, he and his wife and their five children, moved to Waukegan, Illinois, in 1927. Orval enrolled in the LaSalle Extension School in Chicago and completed his education, becoming an accountant. The latter part of his working career was as an accountant, comptroller, and secretary/treasurer for the Chicago-based Gulbransen Piano Company.

His wife Jennie was a registered nurse who worked at the Jasper County Hospital in Rensselaer as a surgical nurse and radiology technician prior to her marriage. Orval was a farmer, having taken over the family farm after the death of his father in 1911

After his retirement, Orval and Jennie moved to Dunedin, Florida. They returned to the Chicago area in the mid 1980’s and both died there in 1986. They were sent home to Indiana for burial in Weston Cemetery in Rensselaer, Indiana