Clayton was the 5th of seven children born to a Kentucky farmer and his wife, George and Lizzie. Lizzie was a first generation child of a couple who had immigrated with their parents from Germany around 1850. His mother died when he was eleven years old and he was not fond of his stepmother.  He was also not fond of life on the farm.

He enlisted in the U.S. Army on 23 Jun 1916 at Columbus Barracks in Columbus, Ohio. He lied about his age – said he was twenty-two.  He wanted to serve in Mexico but, instead, was sent to Savannah, Georgia.  His outfit was Battery A or Battery E of the 34th Artillery Brigade, 64th Regiment CAC (Coast Artillery Corps); heavy artillery- 8″ Howitzers and French 75’s. Clayton was trained as an instructor on the French 75’s.  On 14 July 1918, he and his fellow soldiers shipped out from Hoboken, New Jersey on a thirteen-day trip to Liverpool, England.  Clayton said that he vomited only one meal during the trip. From Liverpool, they went to South Hampton from where they traveled across the English Channel to Le Havre and on to St. Nazaire and Angers. When crossing the English Channel, the third ship in his group was bombed. That night, LeHavre was attacked.

His outfit was still in training when they arrived in France.  Clayton said they usually had cooks who made regular meals for them, but for emergency rations, they ate hard tack: crackers and canned beef. On Thanksgiving Day (28 Nov) in 1918, he broke ice on the Loire River to take a bath. He was at the Metz Artillery Center, at the front, when the armistice was signed. He got drunk the night after the armistice was signed – bought champagne for $2.50 a quart. He said it wasn’t too cold in France, that he’d been billeted for a couple of months with a French family, and that he liked the French better than the English.

On 11 Feb 1919, Clayton left France from St. Nazaire on the USS Huron. The ship traveled through the Azores on the way back to the United States. He said he got seasick and vomited most of his meals. He also ran into an old friend from Petersburg on board — a Navy mess chef named Frank. He ate all the rest of his meals with the Navy guys. They hit a huge storm and lost four men overboard before they managed to get all the hatches closed. They landed at Newport News, VA on 24 February 1919.

He was discharged from the Army on 1 Jul 1919, after his father wrote a letter saying he was needed on the family farm. He arrived home at the Split Rock farm outside Petersburg, KY on 4 July 1919.  By July 15th, he was living with his sister and brother-in-law in Aurora, IN  and working for Royer Wheel Company.  After the wheel company closed, Clayton got a job as a baker apprentice at Huff’s Bakery in Aurora.  He also worked for the Dearborn Bakery in Aurora, the Domestic Baking Company in Lawrenceburg, and the  Dillsboro Bakery.  He then owned his own bakery in Aurora. He finally had to give up the bakery business after he got asthma from all the flour.

Clayton was first elected to public office in 1933 as city councilman in Aurora.  Around 1934, Clayton served as acting mayor of Aurora. Although asked to do so frequently over the years, he refused to run for mayor because he was ashamed of his lack of education. Nonetheless, he held several other elective offices during his lifetime: city councilman (twelve years), chair and precinct chair of the Aurora Democratic Party (twelve years), county councilman, and chair of the city park board. The pavilion in the Aurora City Park was named after him to honor his many years of service.  He joined the Aurora Chamber of Commerce, serving as a director for eighteen years and as president for five years. In 1987, he was made a lifetime director of the Chamber.  Clayton was a lifelong, active member of the Democratic Party in Indiana. He was well-known in the party as a good fundraiser and as the person to know in Dearborn County if you were running in any kind of statewide election.

After he sold the bakery, he was employed as police officer and fire fighter for Joseph E. Seagrams & Sons, Inc., in Lawrenceburg,  from 1936 to 1964. He worked for them first doing construction on a new plant, but then moved on to their Police Department and, finally, to their Fire Department, before returning to the Police Department to stay. Most of his employment was with their Police Department. During his tenure with Seagrams, he was promoted to sergeant, 1st sergeant and midnight chief.

In 1964, Clayton was appointed by Indiana Governor Mathew Welsh to manage the state motor vehicle licensing station in Aurora.  He managed the Aurora License Branch for eight years.

After his wife died in 1988, Clayton moved into an assisted living facility and then a nursing home in Lawrenceburg.  His family and friends celebrated his 100th birthday with him on 7 March 1998.  He was Dearborn County’s last living veteran of World War I.  The various veterans groups honored him for his service and most of the local elected officials, including Indiana U.S. Senator Lee Hamilton, attended the event and spoke about his many years of public service.  He enjoyed the party immensely.

Clayton died not quite a year later, three weeks short of his 101st birthday.  He was buried with his wife in Aurora’s Riverview Cemetery.

Joseph moved from Ohio County, Indiana, to Russell County, Kansas, about 1900. He farmed for a number of years in the Kennebec Community south of the Smoky River, then lived in Bunker Hill, before retiring to Russell. He was the grandfather of 1996 Republican presidential candidate Robert J. Dole. 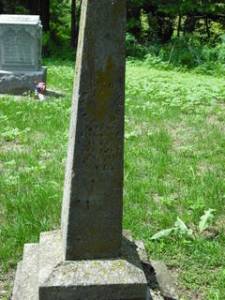 Isaac C. Bovard moved with his family shortly after his birth to Indiana from Hamilton County, Ohio. By 1820 the family was living in Dearborn County, Indiana, where Isaac’s future wife, Ursula, was born and raised. After their marriage, Isaac and Ursula lived in Cass Township, Ohio County, Indiana, until their deaths. 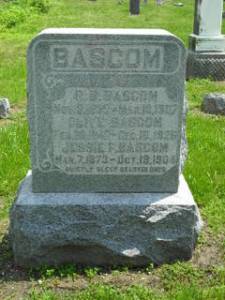 Olive was the second wife of Robert Bruce Bascom. She was born in Ohio County, Indiana to Isaac C. Bovard and Ursula Shepherd. Olive lived in Ohio County all of her life and had nine children with Robert.

Robert Bruce Bascom was born in Switzerland County, Indiana in 1839 to Carley H. Bascom and Elizabeth Potter. He enlisted as a musician in the company band of the 16th Indiana Infantry. He mustered out on 23 May 1862 in Washington, D.C.

He first married Margaret Littlefield on 1 Mar 1863 in Switzerland County. Margaret died on 15 May 1866. They had one child, Edward H. Bascom. On 4 November 1866, Robert married Olive Bovard in Ohio County, Indiana. Olive was born in 1847 and was the daughter of Isaac C. Bovard and Ursula Shepherd. Robert and Olive had nine children and lived in Ohio County where Robert worked as a farmer and dry goods merchant.

Robert died on 10 Mar 1907 in Ohio County. Olive died many years later, in 1926, also in Ohio County. They were buried in Littlefield Cemetery in Switzerland County, Indiana, along with their daughter, Jessie Florence Bascom.

Joseph resided in two Indiana counties, Ripley and Ohio. He moved to Moline County, Illinois, about 1858.