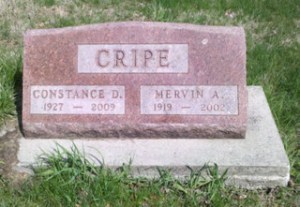 Mervin Aldean Cripe lived on a farm in rural Clinton Township, Elkhart County, Indiana until he left home to go to college about 1938. He later lived in Kosciusko County, Indiana from 1954-1961 when he was pastor of the Eel River Church of the Brethren. He retired to the Timbercrest Retirement Home in North Manchester, Indiana in August 1993 and lived there until his death in 2002.

Mervin lived in Chicago, Illinois, while attending seminary at Bethany Theological Seminary (Church of the Brethren). He was pastor at the Swan Creek Church of the Brethren, near Wauseon, Fulton County, Ohio from 1949-1954. He was pastor for many years at the Brook Park Community Church in Brook Park, Ohio, a suburb of Cleveland in Cuyahoga County. He lived there from 1961-1993.

Mervin attended Purdue University for three years from 1938-1941. He then participated in Civilian Public Service work for the duration of the war. He worked at the University of Maryland in the Dairy Department, spending time at College Park and at Bowie during his CPS days. By this time, he knew he wanted to be a minister, so he finished his college work at Bridgewater College in Bridgewater, Virginia in 1947. Here is where he met his wife. They had been introduced before, but got better acquainted while working together on a college play “The Corn is Green.” Mervin played Morgan Evans and Constance played Miss Moffat.