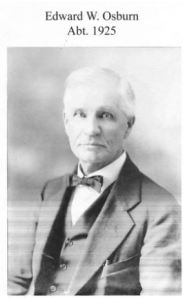 Edward Walker Osburn was the youngest of nine children born to Harmon and Elizabeth “Eliza” Jane (Packard) Osburn. He was educated at Indiana Asbury (now DePauw) University and Garrett Biblical Institute in Evanston, Illinois. He was admitted to the North Indiana Conference of the Methodist Episcopal Church in 1881, ordained Deacon in 1883, and Elder 1885. He married Florence “Fannie” Hobson in 1885 and she died of tuberculosis in 1899. Three of their six children lived to adulthood.

Between 1884 and 1896, Edward served as pastor of churches in Noblesville, Greentown, Jolietville, and Bunker Hill, Indiana. From 1896 to 1899 he was pastor of the St. Charles Avenue M. E. Church in New Orleans, Louisiana. Following a period of grieving from the loss of his wife, he served in Wadsworth, Ohio. There he met his second wife, Elsie Hard, with whom he had three children. In the following years, he served congregations in Texas, Alabama, and Missouri.

He retired to Florida in 1913. Edward was taken ill in St. Joseph, Missouri while attending a conference of the Methodist Episcopal Church. He was hospitalized and later died on 4 November 1931. His body was returned to Noblesville, Indiana and he was buried there at Crownland Cemetery.