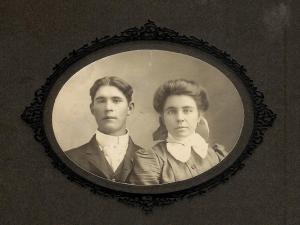 Ed Morgan, who was a homesteader in Nebraska, marks 94th birthday. (Taken from a newspaper story in Washington, Indiana):

Ed Morgan was 11 years old in 1895 when his family left their farm east of Washington IN and traveled to Nebraska. “It was easier to get on out there,” he said. “More room and good farmland.” They went by train with their household goods and horses and milk cows loaded in a box car. They rented a farm for seven years, came back to Indiana and promptly went west again. “It was quite a change back here. Our fields out there were half a mile long, and here they were 40 rods.”

After 1902 the young Ed worked for his uncle (Kim Morgan) a while and on a ranch and in 1911 homesteaded in the sand hills of Nebraska.  His house there was part wood and part sod, but he had built and lived in several sod houses.  The only trees in that country were ones the farmers set out in a grove, he explained.  Sod houses were not only easier to come by, but were cool in summer and warm in winter with walls two feet thick. The Morgan photograph album has a picture of Ed -plowing with a six horse span and he remembers the first late model threshing machine he used threshing 1,000 bushels in half a day.

In 1916 he traded a pair of horses for a model T-Ford, but when his children by his first marriage went to school he remembers that they drove the three-and-a-half miles in a buggy. “The Old West wasn’t like the picture shows,” he said” They show cowboys out chasing cattle on the run.  I’ve worked with men but I never saw them running.  And in all my time there I only saw two fellows carrying guns.  They just had rifles on their saddles in case of coyotes going after the calves.”

In 1937 Ed came back and married Ethel Prosser, a childhood neighbor.  The two of them had gone to school together in the Wathen school north of Billings crossroad, the neighborhood where Ethel grew up.  She had been a member of Bethany Church.

They farmed here until 20 years ago when they sold the place and moved to town.  Their furnishings include an elaborately carved settee and other pieces from Mrs. Morgan’s family that are over 100 years old.  Both of the Morgan are more interested in the thing they have planned for the coming months than in the way thing were long ago, but the memories are there.

“I gave up chewing tobacco when I was 18,” Ed said.  The young fellows all chewed tobacco out in Nebraska because if a snake bit you,  you could smear your chaw on the bite.  But one time I started in on a double wad and it made me sick.  I never chewed again.  “It’s been 73 years since I smoked a cigar and I never smoked a cigarette.”

“When I was in the Platte River Valley near Lexington, Nebraska, the migrating geese came through in the spring.  When we sowed grain it had to be disced in before night or you’d come out the next morning and the geese would be there eating all the seed.”

“Before there were trucks to haul away your grain or livestock for sale, I lived 30 miles from the railroad.  To get there meant an overnight stop on the way with the teams and wagons.”

Mrs. Morgan who whizzes through a daily schedule that many women half her age couldn’t manage, laughs when she remembers how sickly she was as a child.

“When I was three years old, the family never thought I’d make it and they got a burial dress ready for me.”  The little white dress dress, stiff with elaborate embroidery that many museums would love to have, is among her belongings.  She turned out not to be sickly after all.